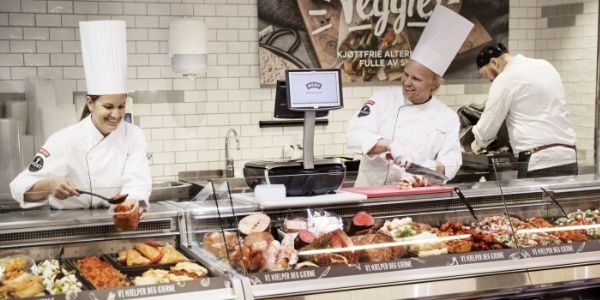 NorgesGruppen is Norway’s largest grocery wholesaling group, with approximately 1,830 stores throughout the country, which include stores such as Kiwi, Meny, Joker, and Spar.

NorgesGruppen Merkevare is a business area with four industries; Unil AS, Joh. Kaffe AS, Bakehuset AS, and Matbørsen AS. These four companies produce and supply their own brands, such as First Price, Jacobs, Fjellbrød, Evergood, Ali, fresh food, and so on for the NorgesGruppen grocery stores and catering marked.

To support their business, Bakehuset AS and Joh. Kaffe AS use Infor M3. Bakehuset needed a system that could give them a quick overview of integrations and business processes. Being able to detect errors quickly or detect them before the error happens was important for Bakehuset.
The company selected Infor M3 simply because they wished to collate all its data in one place for their analysis and interpretation.

Bakehuset overcame the difficulty it experienced in 24/7 support by investing in Vince Butler (VBU), an ERP software/solution. With VBU, it can establish alarms that would trigger in response to certain problems arising. This alarm could be received across a variety of mediums (including via phone) and would include detailed information pertaining to the problem itself and how best it could be solved. In this way, Bakehuset benefits from “proactive” warnings with tailor-made boundaries and variable levels of escalation.

Bakehuset implemented different dashboards for its departments—these dashboards specially cater to each department’s needs. They offer an overview of all Bakehuset’s bakeries and complete command over the relevant information in Infor M3 (VBU interacts with M3 on-demand and with ease). Bakehuset can connect multiple users to VBU using its simple user interface and widgets (with their distinct colors and clear explanations). VBU was a worthwhile investment for Bakehuset—it handles problems faster and with less manual effort, thereby saving considerable time and money. In addition, they have recently automated so-known errors are corrected by VBU.

NorgesGruppen is Norway’s largest grocery wholesaling group. Four industries produce and supply their own brands to grocery stores. Bakehuset wanted to improve its data, processes, and integrations 24/7. The combination of M3 and Vince Butler  (VBU) is so effective that NorgesGruppen Data AS and NorgesGruppen Regnskap AS (the accounting company) now use VBU to save time and money.

“Bakehuset has detected errors in a central system before Norgesgruppen’s own data has detected the error, impressively.”

“With Vince Butler (VBU), you get to know extremely fast when things go wrong.”

“You can develop widgets over time and add new ones along the way; it’s almost just your imagination that limits how to customize Vince Butler (VBU).”

Share...
Go to Top
We use cookies to ensure that we give you the best experience on our website. If you continue to use this site we will assume that you are happy with it.OkRead more